Tips To Improve Your Site Security With VPS Hosting 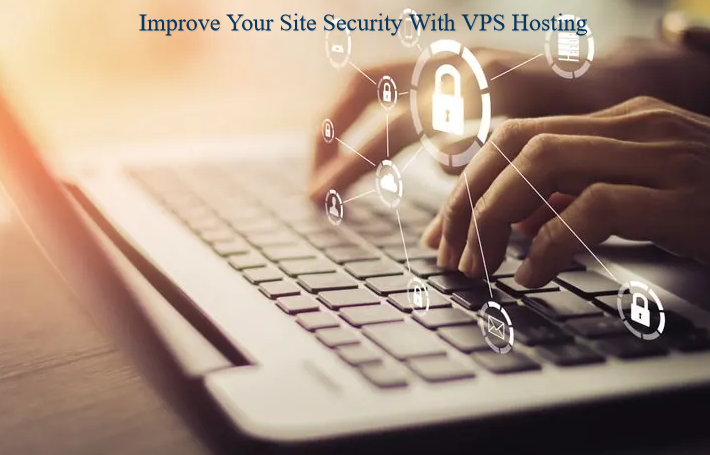 There is an explanation. The theft of personal and financial information, the loss of data to clients, and the destruction of websites’ content Cyber-attacks are very real and shouldn’t be taken as a joke.

This article will look at the security measures that are associated with Virtual Private Server (VPS) Hosting. We’ve found ways to ensure your server is secure.

What is VPS Hosting?

Virtual Private Server Hosting, also known as VPS Hosting, is an option for hosting websites in which one physical server can be divided into several virtual servers using a technique known as virtualization of servers. Each virtual server receives a number of resources. The operation of every website hosted on the server is independent of any other website hosted within the physical server.

For instance, if you select a VPS Hosting plan that has 4 GB of RAM 80 GB of storage and 4 CPU cores these resources are allocated to you, and only you and your site on the server will be able to access the servers. Although this is obviously a way to ensure web performance, it also offers numerous security benefits too.

Also Read: Why Your Website Needs SSL – Types Of SSL

As we mentioned, every website on the VPS server operates independently from other websites running within the server. This is accomplished by the hypervisor.

A hypervisor is usually a software application that sits on the metal surface or the operating system on the server. The primary purpose of a hypervisor is to create VMs which are also known as Virtual Machines. In the context of hosting each website is considered a virtual machine. Therefore, if there are 20 websites running on the VPS server, then each site is a virtual machine.

Every VM that is made by the hypervisor will be separated. In our case, there are 20 virtual machines located on the servers. Every VM uses the resources of the server. But, each VM is totally independent of all other VMs that are on the same server. Indeed, VMs cannot even recognize the existence of other VMs. Each VM acts as an individual computer that has a set amount of resources.

The advantage of security here can be seen in that it has no spillover effect. This means that any changes made to any VM is going to have no effect on other VMs on the server. For websites, it is a major benefit.

If there’s no separation between the two from one website, the security weaknesses of one website could affect the safety of your site. Your website is at risk even if you’ve taken care of everything. VPS solves this issue by guaranteeing complete isolation of every site within the servers.

Access to root is considered the top possible level of access an individual user has in Linux. If you’re familiar with computers you’ll be aware that Windows often requires “Admin access” for certain tasks. Root access is a Linux version of the Windows version.

In simple terms, Root is simply a user of a Linux environment that has full free access to all the files on the system (in this instance that of the server). It is often provided in VPS due to the level of isolation that is possible. In essence, every VM is a tiny server and thus root access may be granted. Changes made to one VM will be restricted to the VM in question. This will ensure that all other websites running on the server are unaffected.

Root access is a fantastic feature that can provide increased security on websites. It lets you install security software from third parties and make crucial system configuration changes, and ultimately customize your server as you’d like. If you’re concerned about security using root access, it’s the best way to increase the security of your website.

Good Reads: Advantages of Using A VPS for Your Business

How can you protect Your VPS server?

Use security applications from third-party sources

There is a wide range of security software that is third-party. Each application typically has a distinct subject matter. Some are excellent at preventing malware while others might be masters at DDoS attacks.

Although it could be appealing to utilize every single one, the most effective option is to select only a couple of apps that can be considered to be good all-rounders. A quick search online can give you the most effective selections.

Automating cyberattacks is an increasing trend. Many cyber attacks on sites are performed by bots nowadays. What makes it simple for bots is the fact that lots of websites use the same security configuration the default configuration.

Change that. For instance, the default port for listening for SSH is port 22. Switch it to a different port. It will only take just a few seconds to locate an instructional guide to help to complete the task. The process isn’t more than one or two minutes regardless of whether you’re making it your first time.

There are also lots of unlocked ports that are not being used within the network. Every port that is open could be an opportunity for a cyber attack. Thus, shut down any ports that are open that you’re not using. This shouldn’t take more than a couple of minutes.

One of the most significant benefits of using VPS Hosting is that you can do whatever you like on your server. There is no limit to cutting, editing, or and copying anything you’d like to.

It can also cause problems when there are multiple users working on the server, and they aren’t aware of what they’re working on. It’s very easy to accidentally delete lots of crucial files on your server. It really does not take much to damage your server using this type of access.

Luckily, VPS has a solution — the access hierarchy. With VPS it is possible to create multiple user profiles and give them access to perform specific tasks. Naturally, your system administrator will require full access. But, the person who creates your newsletters is not required access to HTML documents on your site. With VPS you can choose the level of access each user has. This is something you’ll need to address quickly to avoid any accidental catastrophes.

Use The Latest Software Versions

It is a given that the older your software version is, the more vulnerable your VPS will become. It’s not that difficult, as only just a few clicks of the mouse to install the needed updates to the OS. (OS).

It’s also possible to automatize this procedure. Based on the OS you’re using the most likely method is the apt-get package to run Debian or Ubuntu or yum/rpm on CentOS to run system updates. This is automated using cron jobs, which is software that runs on Linux that can schedule an executable command or script in your VPS to be executed at a specific date and time, or through the control panel.

Alongside the updating of server-side applications, if are using a Content Management System (CMS) we suggest keeping an eye out for updates and installing them when they become available.

Monitoring your server logs can help you keep a close eye on the activities of your VPS. By keeping track of your VPS equipment and software and systems, you’ll be more in case any issues pop up in the future.

If you’re constantly monitoring activities that affect utilization of resources and users’ activity, traffic levels, and software-generated errors you’ll be more prepared to tackle the problems that arise. If it’s about preventing or solving the issue, being aware of the issues you’re facing will help you solve the problem quicker.

A useful suggestion? Create emails to notify you of any errors or warnings so that you can monitor the events in real-time.

Set Up Your Firewall

You don’t want any unwanted traffic, do you? This is why you need a firewall.

The majority of Linux-based operating systems come with built-in firewalls (think firewalld, iptables UFW and DebianFirewall). To manage iptables in a way that is easy and to integrate with other panels for control, you should consider getting the free ConfigServer Firewall, aka CSF. The firewall configuration script is designed to enhance security for your VPS and provides you with an intuitive, advanced interface to manage your firewall configurations.

Do you need additional security? ModSecurity can be added as an add-on to your firewall to allow you track HTTP connections, infiltrations that are related to your website’s code databases, and more. Whatever you opt for an already-installed firewall or an individual firewall you must still configure the following settings:

VPS Hosting is designed to perform the same way as Dedicated Hosting however at a lower scale. It gives you your own space, to speak, you are completely free to make your own decisions as you would like to. It’s a safe way to host your site but does not sacrifice performance or dependability.

So, if you’re planning to make the switch from Shared Hosting or create an entirely new website for your business and you’re worried about security issues, the VPS hosting offered by Vpswala could be the best option for you!